The Dreaming Field by Ron Savage 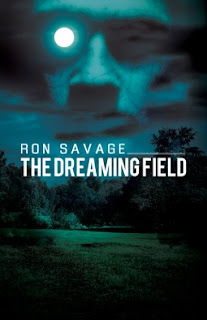 This is the story of Jonathon Clayman and Simon Aaron. Having dreamed about each other since they were children, it is not until they are grown men that they become aware of each other in the waking world. Jonathon is now a politician and Simon a highly acclaimed artist. Unbeknownst to them though, their lives have been chosen for a higher purpose. a battle is raging between the Abyss and the Dreaming Field, and they have been chosen to help fight the battle. Will they be able to save themselves in the face of insanity, or is someone pulling their strings too tight?

I enjoyed this but found it a little confusing at the beginning as the different characters and settings were established. There were quite a few different threads of the story going on, and it took me a little while to sort out who was who. Once I had sorted things out in my head though, everything took off, and I couldn't put the book down. The characters were solid, and I cared about them and their lives and what happened to them. Indeed some of the bad guys were REALLY bad! The pace although slow to begin with, soon belted along. The story itself is different and quite dark, but that's what DarkFuse specialise in, and that's why I enjoy reading and reviewing their books!  All in all, a great book with a fantastic ending, that although a tad confusing to begin with, soon levels out to be a great horror that I recommend totally.
Posted by Unknown at 10:35 No comments:

A Taste of your Fears (Literature-ly You) by Matt Shaw 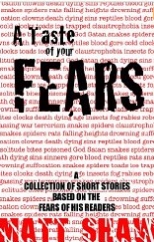 This is a collection of 6 of the 'Literature-ly You' service Matt provides to his readers. The stories are personal with the recipient as the main character in a story built around their worst fears, or as in the case of one of these stories, in with another character from Matt's books.

When I first heard of this service, I wasn't sure I wanted to be put in a book with my worst fears, I know Matt's writing and the way his mind works! But having read a sample selection of what the service provides I am certainly thinking about taking the plunge. I like the way they are tailored specifically to the client and it is a nice gift for someone you know. One or two of the stories, I personally know the recipients so they were more 'real' to me. This is a great example of another talent to add to Matt's already bursting writer's resume!
Posted by Unknown at 10:01 No comments: This is the latest installment in the Roger and Suzanne Bowman Mysteries. This time they are somewhat closer to home though. Roger has been asked to investigate shady goings on at dog shows by the CEO of the AKC (American Kennel Club). They are lent a prizewinning dog, and Bruce gets to step out of his Nanny role and extend his skills as a dog handler. Suddenly, though, they find themselves knee deep in murder, drugs, stalkers and attempted drivebys. Have Roger and Suzanne got too close to the truth? Can they solve the mystery so some sort of normality can resume?

This is the latest of the Roger and Suzanne Mysteries and also the longest. This is necessary though as there is a lot of story and ground to cover. Once again, although it is the latest in the series it does work well as a standalone with no previous knowledge of the books before it, but to get a sense of the characters I would recommend reading them in order. This time the world of Dog Shows is at the forefront. It is an interesting subject, one I am interested in, and so got into the story right away. The pace was unrelenting, and I found myself page turning like a mad woman. The whodunnit aspect was well played out, and I was quite surprised when the culprit was revealed - the mark of a good thriller in my mind. Well done Jerry, another belter! Here's hoping there are more.
Posted by Unknown at 09:39 No comments:

Children of No One by Nicole Cushing 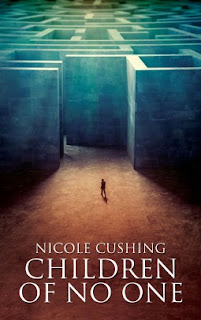 This is the story of an underground labyrinth in Nowhere, Indiana. Thomas Krieg has been abducting boys for ten years, and placing them in the labyrinth to try and survive, all in the name of art. Now a sadist wants to see the labyrinth, and Krieg's partner, an insane occultist known only as Mr NoOne thinks it is the perfect opportunity to call forth the grandest of the eldritch deities, The Great Dark Mouth.....

Since I have been reviewing books, there have been one or two that have stayed with me for a while after I have read them. This was one such book. Although not very long, there is much packed into its pages, without seeming to be overloaded. With a tiny cast and sparse locations, it is tight and well written VERY dark novella. The labyrinth itself was dark and claustrophobic, and some parts were difficult to read as they sent chills up my spine. Most of the four or five characters seemed to have a screw loose, and were quite evil in their own ways. That being said, for a debut novella, this shows great talent and I would love to see more by this author.
Posted by Unknown at 10:17 No comments:

Dark of the Sun by Maynard Sims 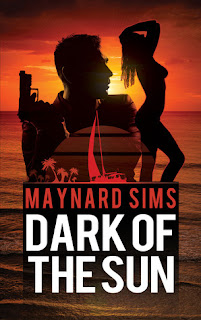 This is the story of Harry Beck. He is happy living a lazy life in the Bahamas. Having lived there all his life with his 2 childhood friends, Alan Lancaster and Jack Dylan. Now grown up, he runs a boat charter for the guests of Alan's hotel. One day when visiting Alan, Alan's wife and daughter are killed in a car bomb. Whilst trying to get to the bottom of the mystery, and trying to locate a missing Alan, Harry stumbles on some information that will change his life forever. Soon all he holds dear to him will be at stake, and he begins to wonder if he ever really knew his friends at all...

This was markedly different from the usual DarkFuse offerings. Having been used to dark fiction from them, this was a suspenseful thriller that kept me glued to every page. It was a fast paced rollercoaster of a ride with many twists and turns until the very end. In fact just when I thought I had everything worked out, at about 96% of the book done, the author took me by the hand and dragged me off in another direction entirely! The ending was explosive and quite unexpected. The characters had depth,  and I enjoyed getting to know them on a personal level. The paragraph structures were great, quick 5 minute chapters that ended in such a way as to keep me page turning to find out what happened next. Hopefully there will be more like this from the author, as I thoroughly enjoyed reading the story.
Posted by Unknown at 14:19 No comments: