In the Shadow of Midnight by Marsha Canham 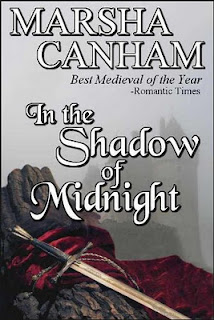 This is set some years after the events of 'Through a Dark Mist'. Lucien and Servanne are now married and have children of their own and Eduard has grown up and established himself as a fine and noble knight in his own right. This time around, Eduard is the hero of the story and he has been charged with rescuing Eleanor, the Lost Princess of Brittany from the clutches of King John. They use the excuse of escorting Lady Ariel de Clare to her wedding as a cover.

Once again this was a fine historical romance, and a jolly good swashbuckling romp. I enjoyed this as much as the first (although there is no pressing need to read the first before this as it is a standalone story in its own right) if not more so as more of the familiar names from the Robin Hood legend crop up here. Names such as LittleJohn, Maid Marienne and Alan-a-Dale (albeit known as Alan-of-the-Dale here.) The smouldering romance between the feisty Ariel and the taciturn Eduard was played out to teasing perfection and there was plenty of swashbuckling action to boot. There were moments when I truly gasped out loud!

A fantastic historical story that I heartily recommend especially if you have read the first. I am eager to get on with the third now!
Posted by Unknown at 18:44