The Last Arrow by Marsha Canham 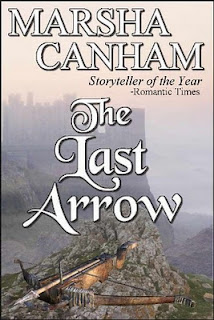 This, the final story in the Robin hood Trilogy, is set some 11 years after the events of 'In the Shadow of Midnight'. This follows the life of the Black Wolf's daughter, Brenna. She meets a strange man poaching her father's fish, and her brothers and friend invite him back to their castle. Is there more to him than meets the eye? Thus begins a swashbuckling adventure filled with tournaments, dungeons (donjons), archery and a dangerous assassin bent on destroying the Wardieus of Amboise.

This is just as good as it's predecessors, if not better. I wholly identified with Brenna and it was great seeing a woman outbowing her rivals, most of them men! The story also sees the legend of Robin Hood finally coming together and all the old favourites are there. I loved the relationship between Gryffin and Brenna. it was an intensely passionate relationship from their first meeting and it took my breath away in places! There was much more action this time around, with the tournaments and culminating in the final showdown between the Wardieus and Sir Guy of Gisbourne. The ending was satisfying and tied up all the loose ends nicely.

Once again if you love swashbuckling historical romances, you will love this. Even if you are not sure, give it a chance. You won't be disappointed.
Posted by Unknown at 08:27