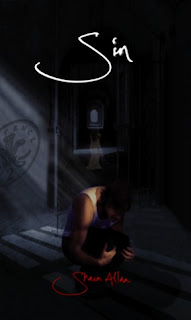 This is the story of Sin. A young man who checks himself into a psychiatric hospital because he can kill people just by thinking about it. He then tries to commit suicide by teleporting out of the hospital but he ends up on a beach somewhere. Not knowing what to do or where to go - he is visited by his dead sister. She has come to show him that all is not as it seems and is his doctor as benevolent as he first appears or does he have some skeletons in his closet?

This was a fantastic story. Written in the first person (not an easy thing to pull off but the author manages it and then some) I was really able to get in Sin's head and feel his anguish as the revelations start to pile up. It was a good solid page turner and the ending was suitably explosive. For a story with so few main characters I was certainly gripped from beginning to end.

I totally recommend this because it's different. And that in and of itself is its appeal.
Posted by Unknown at 19:14