Season of the Wolf by Jeffrey J. Mariotte 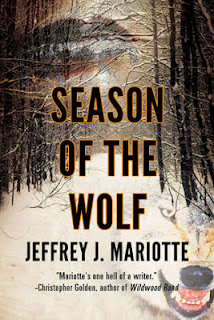 This is the story of a town called Silver Gap. Silver Gap has developed a wolf problem. Wolves are unheard of in this part of America and it starts with the death of Mike Hackett. Soon the Chief of Police realises they have a serious dilemma on their hands as more and more people are killed. Alex Converse has come into town ostensibly to film an eco-film about trees being killed off by Bark Beetles but he also has other reasons for visiting Silver Gap. Someone is also using the confusion and shock of the wolf attacks to kidnap women and use them for their own twisted agenda. Can Alex find the women and can the wolves be stopped before there is too much bloodshed?

This was a fast paced and well written story. There were three distinct threads that ran through it - the wolves, the missing women and the real reason Alex came to town. These threads all came together in a truly exciting finale. Throughout the second half of the book I was on the edge of my seat as things were moving so fast I didn't want to miss anything! This is the sort of story I could easily see being made into a blockbuster film. There were elements of suspense and supernatural in places and it made for an interesting mix. There were a couple of niggly points but that's all they were - niggles, they weren't enough to put me off or spoil my enjoyment in any way.
Posted by Unknown at 14:31