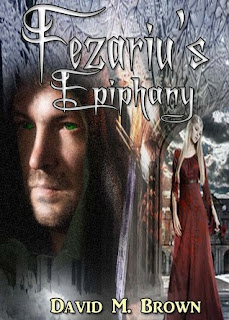 This is the story of Fezariu, a young man born to a prostitute - who believes his mother died when he was 12. When his beloved stepfather is killed, he finds out that his mother is still alive and working in a famous brothel. After her rejection of him he goes and joins the Merelax Mercenaries. He rises through the ranks until he takes an assignment that brings him back to his old home town. There he takes stock of his life and finds out the truth about why his mother rejected him. on learning this he decides to exact a terrible revenge.

I started this with a little trepidation as I am not a gigantic fan of fantasy novels. I am so glad I did though - I was sucked in straight away. It wasn't overly 'fantastical' but there were enough different races and worlds, all beautifully described, to keep me interested. I had no trouble picturing any of the descriptions. Poor Fezariu has seen so much sadness in his short life that he thinks a mercenary life is best for him as he cannot get close to anyone there. he does however become friends with three other recruits. The story is told mostly from Fezariu's point of view but occasionally changes as the story dictates, for example at his birth and in his letters to his stepsister. This was a good idea as it kept the story fresh. The ending was fantastic, and I had a tear in my eye.

I have nothing but praise for this, and I hope the author has more to come.