Bend Me, Shape Me by Debra R. Borys 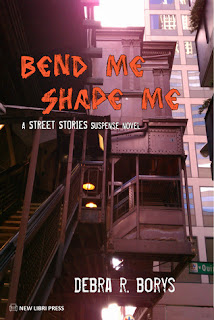 This is the second in the 'Street Stories' series of suspense novels that highlight the trials and tribulations of young kids homeless and on the street. Focussing on Snow and her brother Alley (Alejandro), Jo Sullivan must investigate concerns that a psychiatrist working with the youngsters is driving them to suicide. Snow is concerned her brother may be next after her friend slits his throat after a session with this psychiatrist. Can Jo solve the mystery or will her own demons refuse to let her see what is under her nose?

Told in three distinct voices, Jo, Snow and Snow's Great Uncle Leonard - this was a fantastic follow up to the first 'Street Stories' book, Painted Black. This was a rollercoaster of a book both with regards to the action and emotionally. I enjoyed it and found it hard to put down. The characters were all realistic, and the vivid descriptions of a bleak wintery Chicago made me think of all those poor kids that have nowhere to go. This is a series that can only get better and better, and although the books are linked, they can be read quite happily as standalones. I can't wait for the next one!
Posted by Unknown at 10:20