Wheezer and the Shy Coyote by Kitty Sutton 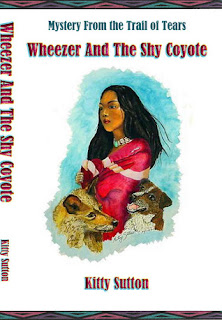 This is the second in the series of books featuring Cherokee Sasa and her doggy friend Wheezer. This time they are trying to solve the mystery of who is selling whiskey to the Cherokees. With the help of Coyote, a half Lakota, half Blackfoot and a wild coyote Sasa has named Yellow eyes - it's not long before she finds herself over her head and in very real danger. With two Native Indians already dead, can Sasa and Wheezer solve the mystery before anymore lives are lost?

I really enjoyed the first Wheezer story and its follow-up was certainly no disappointment. It was nice meeting up with familiar characters, and Kitty truly does bring them to life in a wonderful way. Once again, this was a work of fiction but it has it's roots in real life history. it was easy to read and I got into the story very quickly. We were introduced to a few new characters this time around, and I do hope some of them find their way back again. The story itself was fast paced and hard to put down. Once I had started I found myself saying 'Just one more chapter....' I hope it won't be too long before we see Wheezer and Sasa again as I will be having withdrawal symptoms!
Posted by Unknown at 12:09