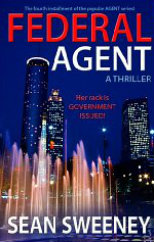 This is the fourth outing for Jaclyn Johnson (codename Snapshot), the visually impaired secret agent extraordinaire. This time around she is chasing a high ranking member of the Ku Klux Klan who has been broken out of prison moments before he was due to be executed. He has targeted certain people for revenge and it is up to Jaclyn to keep them safe, including the President and his opposition, Dick Bennett. With Dick Bennett against her and everything the CIA stand for - will she be able to keep her promise and do her job?

This was another great 'Snapshot' book. I love the gadgets, I love the cars and especially the fact that the Secret Agent is a woman and a blind woman at that. The subject matter of the KKK was a brave one to tackle and I commend Sean for doing it. In no way was the Klan glorified or revered. The bad guy was possibly the most odious I have come across and it worked so well. I enjoyed this greatly and recommend it for fans of the series and for newcomers too. These books stand alone well with only very brief mentions to previous places or missions. Another great 'Snapshot' story, long may the series continue.
Posted by Unknown at 16:20