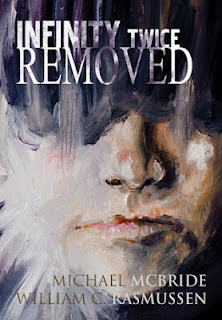 This is the story of Malcolm Jeffers. He was a Navy SEAL deployed in the Middle East until a serial killer known as 'The Infinity Killer' murders his wife and young son. On returning he vowed to find and deal with the person responsible. This he does, vigilante style and flees the scene. Fast forward 20 years and it seems like someone is copycatting the MO of The Infinity Killer when a rash of bodies shows up. Is there a new killer on the loose?

This was a good solid story. I liked the back and forth between past and present as it gave us a peek into the back story of the characters. I felt it could, however, have benefited from being longer. The pace was non-stop and I felt Malcolm's loneliness as he tried to fit in a world without his family. There were some truly gory bits and several places were quite chilling and the ending was quite spectacular. I recommend it as a great lunchtime read but I just wish it was longer.
Posted by Unknown at 14:34